Home› Supporting someone with breast cancer 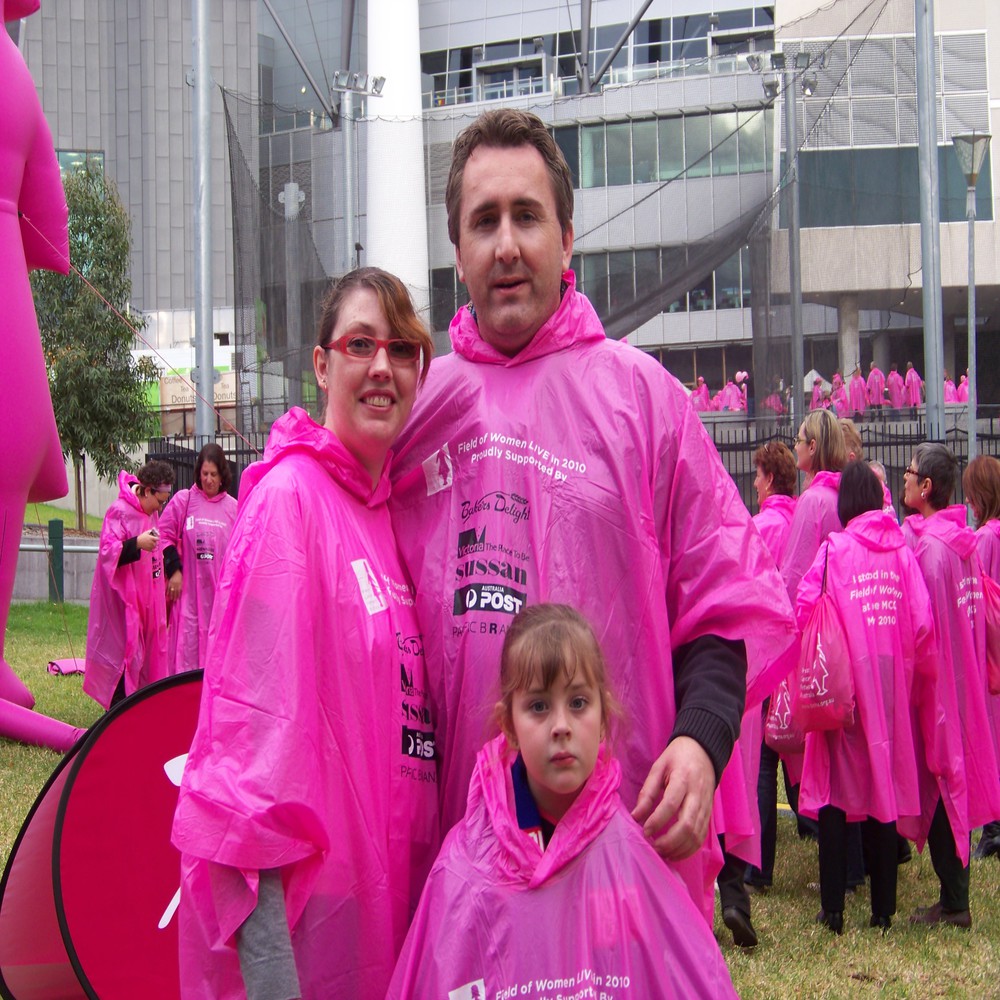 Hello to everyone , Here is a copy of my speech from Friday . I hope that partners can see that our stories are all similar in some way , but we all take a different journey

Life before breast cancer our story

Liz and I have known each other since we were 8 years old. Our paths had crossed over many years but we had no idea that we were meant to be together. By chance we attended a party and stayed in contact.  A relationship developed and after dating over a long distance of 6 months Liz moved to Mildura. We went between two houses just in case it didn’t work. Liz has a little girl Georgie who was 4 ½ at the time, and didn’t want to rush into anything.  We had our lives ahead of us and had many plans for the future.  I would say to Liz, “one day I’m going to marry you” and she would always reply, “and one day I might say yes”.

So life as we knew it was moving in the direction that we wanted, or so we thought. Liz had noticed a change in her nipple and went to see the doctor who had then referred her to a surgeon. The day that Liz was to see the surgeon I was at work.  I received a phone call from his secretary saying that Liz was about to get some results and they thought I should be there. My mind went blank and I didn’t know what to think. Why would I need to be there, what was going to be said?  The drive to meet Liz was one of the longest drives that I can remember with my mind going more than a hundred miles an hour.  When I arrived I was taken into where Liz was and just held her hand. Both looking at each other not knowing what was to come next. Then those worlds that would forever change our life were spoken. “Liz has breast cancer. It is very radical and we need to remove her breast.” Instantly shock set in, I went completely numb. If my mind was running fast on my way to meet Liz, it was just kicked straight into overdrive with no warning.

The next two weeks were a blur of consultations and information.  We worked so well together to remember all the different things that the doctors were saying.  Then the day came of the mastectomy.  Liz’s Journey had begun and at this stage I was a passenger on a roller coaster ride not knowing what was around the next corner.

We are fortunate to have a breast care nurse in our area, and it was our breast care nurse who introduced Liz to BCNA’s “My Journey Kit”. My initial thought was,  just what we need, more brochures!  But what this resource provided us was a comprehensive package of information across the whole breast cancer journey, from diagnosis, treatment, and living with breast cancer, to even life after treatment.  But we had to get past the hurdles one at a time, so being able to dip in and out to the bits that were relevant or interested us was great, and there was even a specific CD in there for partners.  But what I found most helpful were the stories from different women from all ages and experiences. These helped when we were having difficult days and made me feel we were not the only ones on this journey.

Coming from Broken Hill where we were isolated by distance, we had never really thought living in Mildura was a rural part of Australia, with our wineries and beautiful river. However, it became more apparent when we needed resources from major hospitals. Nurse on call became a good friend on the nights when we couldn’t make it to the hospital. The internet was also very helpful to us. We had so many questions to ask and also one big question, how do we tell a 4 year old that mummy has a thing called cancer.

After the operation Chemo followed. We were lucky to have a chemo ward in Mildura and I could be with Liz for her treatment. We had an awesome team of nurses that told us straight what was going to happen and didn’t cotton ball anything. I met some very inspectional people in that ward. Survivors gave us much hope and conversations with them made me really consider our perspective on life.

Liz’s medicine was delivered in a glass bottle one day to the chemo ward. It looked like something out of a MASH episode. I asked what would happen if that was to break. The Nurses told us that we would all be evacuated and the room would need to be cleaned down. It then hit me; they were pumping this toxic stuff into my girlfriend.  To see someone you love go through chemo and the roller coaster ride that followed for the next 18 weeks could only be described as cruel and unusual punishment. When someone is in pain and to touch them means that their bones will ache, all you can do is sit there and let them know that you are “just here”.

We would enjoy the good days and plan for the next ones when the sickness would start.

Like many other families in regional and rural areas, Liz had to travel to another hospital for her radiation treatment. She went to Sydney as her sister lived there and this meant Georgie could go too and they could stay together.

I was comforted knowing Liz was with her family, but I have to admit, this time was the hardest for me personally.  I had to continue working to pay the bills that didn’t seem to stop coming and all of a sudden I felt like I was no longer a part of things. I had been there since the diagnosis and through all the chemo and now had to hear from phone calls what was happening which left my imagination to fill in the gaps. The support which had surrounded Liz and me as we went through the journey together was no longer there for me. Three months seemed to take a year before I would be able to see my beautiful girl again. When I finally made it to Sydney I became very upset to see Liz’s burn mark that seemed to wrap around her body like bad sunburn. I felt as though maybe I’d let her down, I hadn’t been there to support her, to tell her it was going to be ok.

As a young man I thought nothing more of the female breast – but now I know more than I ever wanted. From the day Liz was diagnosed we started a roller coaster ride of highs and at times very lows. We surrounded ourselves with positive people, and we found keeping a positive mind helped us through some very hard times. For me the nights were the hardest. When the sun went down the darkness came and the mind went into overtime.

We had a lot of friends stay away because they didn’t know what to say, but sometimes all we wanted was to see a different face with some news or even gossip to break the monotony.

I wear my emotions on my sleeve and this made it easier to talk to Liz and tell her what I was thinking. Some nights we would go to bed and talk about anything and everything. In two weeks we spoke about what couples would talk about in a life time. Marriage, kids and even death.

I feel fortunate to be able to openly communicate with Liz and tell her my feelings. I know many men would struggle with this, or don’t know how to. I think if I’ve found aspects of this journey bloody difficult, I can only imagine it gets more complicated when there’s little or poor communication between two people who love each other.

But this journey has also given so much to our lives. Seeing how little Georgie responded to things constantly reminded me what’s important.  There was never any judgement, never any silly questions, only pure honesty and never too many hugs.

I have now embraced Pink as a part of my wardrobe and know the true value in telling people how I feel in the moment, not relying on tomorrow coming around. I make time for a coffee and chat with the special people in my life, have quality time with my family where we turn off the TV, and make sure Liz and I keep going on many first dates.

Thinking back to the value of the stories from women in BCNA’s My Journey Kit, stories from women who have “been there”, I’m excited BCNA’s online network now has a group called ‘Partner Support’. This provides a place for us blokes to connect and share our stories, as we have our own experiences on this journey. Working with BCNA to get the word out to partners is something I’m really excited to be a part of.

But back to the beginning, in response to that question, she did one day say yes. I can’t imagine spending my life without my beautiful wife and know we’ll enjoy many more special times throughout our lives, and together we’ll face whatever hurdles come before us.