All those pink ribbons, pink ladies and pink-hatted cricketers have worked a treat. We're a breast aware bunch. We know one in eight women will be diagnosed with breast cancer, we know early detection gives us the best chance of survival and we know we need to check our boobies.

What happens then, when you find a lump? Well, it's straightforward - you go to the GP without delay.

But what happens from there can vary significantly depending on how old you are.

Breast cancer is largely seen as a disease that affects post-menopausal women and while the average age of diagnosis is 61, about 840 women under the age of 40 are diagnosed with breast cancer every year in Australia.

These young women are not being supported as well as you might think.

Breast Cancer Network Australia (BCNA) CEO Kirsten Pilatti says some young women who find a lump in their breast will be told by their GP that they're too young to have breast cancer and dismissed without further investigation.

"BCNA has heard from young women who had to go back to their GP three times before the lump they found was investigated," Kirsten tells news.com.au. "When the lump is investigated, there can be significant out of pocket costs as women under the age of 40 are not eligible for regular, free screening mammograms through the BreastScreen Australia program."

It was mid-December when I went to the GP about a lump I'd found in my breast. That week my husband and I had been debating how much to spend on the children's Christmas presents.

My GP charged $90 for the consultation and I got about $35 back from Medicare. I felt entirely silly wasting that money on a pea-sized lump that was probably nothing. Adelaide woman Libby Hill was out of pocket thousands of dollars just to get diagnosed with breast cancer. Picture: Calum Robertson

I felt a bit less silly when she said it should be investigated and made an appointment for me to have an ultrasound and biopsy the following day. She wrote the appointment time and address down and I went along as instructed.

I had the ultrasound but the doctor qualified to do the biopsy wasn't available so I was told to return in the New Year when there were more staff. The doctor on duty said it was probably a fibroadenoma and there was no urgency.

Something didn't feel right and because I'm breast aware (thanks Campaign Pink), I insisted on a biopsy and returned the following day. I paid for each visit and was out of pocket almost $1000.

In the months prior to this my mother, mother-in-law and my aunt had all had biopsies on breast lumps of their own. They were all detected through BreastScreen and the only cost to them was parking fees at the BreastScreen clinic.

I was the one with the giant mortgage and two small children - why were they paying nothing and I was paying so much just to have a lump investigated? While older women pay nothing for screening, women under 40 are forced to pay up, even if they can’t afford it. Picture: BreastScreen Queensland.

When I returned to my GP to get the biopsy results the following week, she bulk billed me. I had a very aggressive cancer, she said. I'd need surgery and chemotherapy, at least.

I suppose she felt sorry for me with my kids in the waiting room (there was no time to find a babysitter). I remember being vaguely puzzled at not having to pay. I'd always been told my GP (who is excellent by the way) didn't bulk bill. It never occurred to me that billing might have been at her discretion.

That's the thing I've since discovered about cancer, from talking to many young women like me. The financial side of it is baffling and unpredictable. You never know when you'll be bulk billed or when you'll be asked to pay. Whether you're a public patient or a private patient, the out of pocket costs for medicines and treatments are never clear.

My friend Lisa is in regional NSW and paid almost $1500 just to be diagnosed at the age of 38.

"I was extremely fortunate to have an emergency fund of savings because it was so expensive, especially initially, that I was stunned," she says.

Another friend Alicia, also in her 30s, lives in SA and struggled to have her concerns investigated because she was pregnant at the time. She was charged for four ultrasounds that happened before diagnosis and for two biopsies, a mammogram and MRIs.

"The out of pocket expenses have been detrimental to our already fragile finances with me being out of work due to treatment and rehab and being young family there are so many costs," she says.

"The ongoing screening will continue to be a burden for our family. Even before diagnosis the cost of the ultrasounds were huge and I almost didn't have them done because of the high cost. I'm glad I did. This could put women off having potential lifesaving screening." 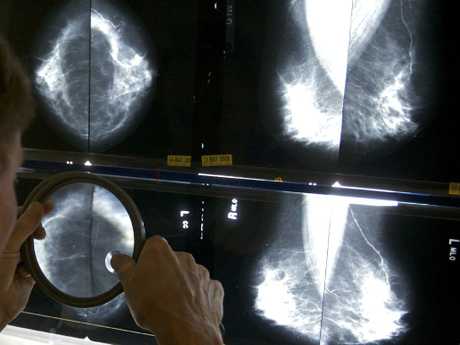 The high cost of screening tests could put many women off being tested at all. Picture: AP Photo/Damian Dovarganes

A 2017 BCNA report found that women typically pay around $5000 in out of pocket costs in the five years after their diagnosis, most of this in the first two years.

Women under 40 are unlikely to have a nest egg to pay for treatment and many don't have a second income to fall back on. Young women typically have much more aggressive types of breast cancer than older women and that cancer is more likely to kill them. This means the treatment is harsh and it has a huge impact on their ability to work.

For the past decade, BCNA have lobbied governments to extend the Medicare rebates for breast MRI and PET scans for Australians with breast cancer.

"As a result, thousands of women are being charged up to $1500 in out-of-pocket costs for the scans used to diagnose their cancer, decide on treatment and ensure cancer does not return." Thanks to events like the Pink Test, we all know about breast cancer — but younger women are still falling through the cracks. Picture: Toby Zerna

Welcome news, for sure but let me say again: BCNA have been calling on Labor and Liberal governments to do this for 10 years.

It is often said that if you're going to get the big C, then the breast is a good place to get it. High curability and a hugely supportive community to help guide you through it and a range of treatment options are available.

We have BCNA, The National Breast Cancer Foundation, The McGrath Foundation and many others doing work that is nothing short of brilliant. They do so much for us but they're not our doctors.

We're told we must be our own health advocates, we must ask questions, insist on tests if things don't feel right, seek second opinions.

We're fighting for our lives, why does it feel like we should be fighting our doctors as well?

I recently attended a local club that had BreastScreen NSW Drink Coasters on the tables - advertising Mammograms for those aged from 50-74.    I went around & changed as many as I could, advising the people on the tables that the correct age was from 40 - and to tell their daughters & daughters in law!! 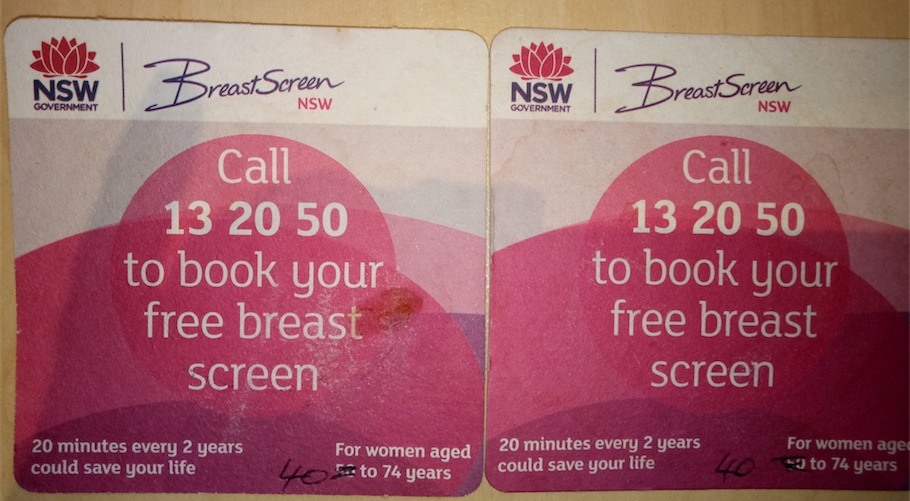